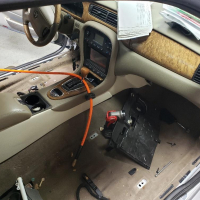 Mindtravel Rhode IslandMember Posts: 1
September 2019 edited September 2019 in Jaguar
I have a 2003 Jaguar S Type V8 Vin # SAJEA01UX3HM84660 . The car was driving in the rain in went into gearbox Fault and restricted performance, blowing the F33 TCM/ECM Control module 15amp fuse. I took the valance off and got to ECM behind the cabin filter and it was completely dry, I cleaned the drain to the left of it and used di-electric grease in the plug and around the seal of the cabin filter box. I put a new 15 amp fuse in and it started right up and was fine. I drove the car for 3 days locally and also kept it in the garage with hood open fan on and also running the dehumidifier. On the third day I drove about 8 miles and the car sat for 5 hrs I started the car to leave and again the F33 15amp fuse snapped (It was warm and sunny all week ). I put a new one in to get me home, for when this fuse snaps the car will not start. I then pretty much took all my kick panels out and seats went thru all my connections on the fuse boxes and modules and found no signs of dampness anywhere. I tested my battery and found it to be 2 things one it was about 50% and also the battery in the car was for a V6 not a V8. I put the car back together and bought a brand new correct original equipment battery and put a new fuse in and again as soon as it started the fuse snapped. I have come to find out the TCM is inside the Transmission and sometimes the boot for the plugs gets old and oil can leak in. But nothing I have read says this causes the fuse to fail with this condition. I don't want to take my transmission apart if there is a much simper solution. My technician is pushing me to have the TCM sent out and tested. Any advice would be greatly appreciated. I found a mouse nest under the passenger side fuel rail, but found no damage to the wires there or inside the fuse panel under the hood. I then put a fuse in the car and it does not snap when you start the car or when you apply the brake or put it in gear. Once the car rolls that is when the fuse snaps. Engine light on, restricted performance and gearbox fault as well as apply the brake light came on this time.