Are we getting duped?

ksims96 Member Posts: 1
May 2016 edited May 2016 in Nissan
Hi everyone, thanks in advanced for your help. I have basically no knowledge of cars so any attempts to keep it really simple are highly appreciated!

My friend was borrowing another friend's car while hers is in the shop, and yesterday she hit someone while backing out in a parking lot. She only hit the lower-middle of the front right door, the woman in the other car was able to open the door with no issues after the accident. Because it's not her car my friend wanted to go under the table and pay her cash so as not to hike up our friend's insurance rates since her car was not damaged. Anyways, the woman sent us a photo of the estimate from her shop and the total to replace the front right door for her 2010 Nissan Cube came to $1500 including labor, and on the sheet they also noted something about the rear door actuator and the right fender needing work. Now I don't know much about car repair but that doesn't seem right if we watched the woman make sure her car was functioning and the damage to the front right door was literally the ONLY damage caused to her car.

She did tell us that her husband also got into an accident a couple of weeks before and was given the wrong information by the person that hit him so they're missing the deductible from that accident, so we're just being cautious and making sure my friend doesn't pay for more than she has to. 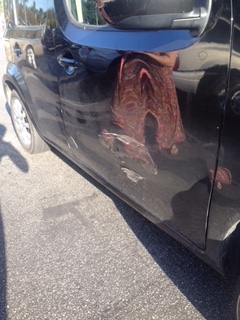